The world in your hand: Intricate and palm-sized historical buildings

Matthew Simmonds is a stonemason who carves intricate designs into stone

Simmonds work is currently on display at the Islamic Arts Festival

(CNN) — For over two decades Matthew Simmonds has been recreating history in miniature form.

From ancient religious buildings to Chinese feng shui, Simmonds finds inspiration through his extensive study of varying cultures and periods.

And it's his choice of canvas -- solid rock -- that makes his work particularly interesting.

As a qualified stonemason, he spends weeks at a time, meticulously carving detailed interiors into tiny pieces of limestone and marble.

"I'm not recreating any one building in particular, but instead looking at the way in which certain architectural trends exist during one particular historical period, then carve it into stone," Simmonds explains.

"I look at the language of buildings and create something of my own."

With a diverse international client base, Simmonds' portfolio spans several histories and cultures. His current work, a nod to Islamic architecture, is on display at the Islamic Arts Festival in Sharjah, The United Arab Emirates.

CNN: Why did you choose stone as your primary material?

Simmonds: Stone is a very beautiful thing because for every human endeavor in history, and by that I mean the human efforts we as a species use to express who we are and what we believe in at any given time...stone is often the one material that remains. It is stone that is left behind for us to piece together history from. It's the way cultures leave a sign on the world.

And stone itself has a power as a natural material because we essentially have an imprint of history left in every rock. Rocks take billions of years to create, have history pressed within them, and you can see traces of the creatures that have happened upon it over time.

It's a beautiful material to carve into because the final product is partially by me, and partially made by nature itself.

CNN: What sort of stone make for the best carvings?

Simmonds: I feel that the best stones for carving are marble and limestone.

These stones allow you to get in all the fine details, but they're not too hard to carve deep into. They allow for finer, delicate work. Materials like sandstone is not strong enough, while granite is too hard.

CNN: How long does each sculpture take to complete?

Simmonds: It can vary quite a bit. Smaller pieces can take around two weeks -- assuming they're not too large and complex -- while the larger and more complex pieces can take several months.

Right now, for example, I've just started work on a fireplace built of multiple different cut stones. The last time I worked on a similar fireplace, it took a year to complete. It is built of 45 different panels, and each different panel shows different subject matters. I try to explore different cultures and time periods from every continent in the world. I'm just about to start it now and I expect this to take a year as well.

CNN: Which sculpture is a standout from your collection?

Simmonds: I was commissioned by Swire Properties in Hong Kong to create three sculptures which incorporated feng shui, called "The Trilogy."

Due to the complexities of creating an internal space that aligned with the regulations of feng shui -- which focuses on how a space can influence good luck and energy -- I found it very challenging, which I enjoyed.

I chose to make three pieces to ensure there was a continuous flow of energy throughout the whole project. The middle block has many windows, which allowed energy to flow freely, and in Chinese culture, the number eight is a very auspicious number, and so I tried to include the number eight wherever possible.

Throughout the sculptures you'll see patterns -- eight columns, eight steps on each piece, eight openings in each piece.

CNN: In your opinion, what are the most beautiful stone buildings in the world?

There's far too many to choose from. I like medieval buildings, and one of the greatest churches in the world is the Hagia Sophia in Istanbul, which is made of brick on the outside but is filled with stone fixtures on the inside. Photographer on the hunt: Discovering India's ancient stepwells Related Article: Up the Down Staircase and into India's ancient wells Another beautiful site is the Ellora temples in India -- ancient structures and caves completely cut from stone. Petra in Jordan is also home to some of the most incredible rock-cut architecture, and then there is, of course, the Pantheon in Rome.

Tell us about your exhibit at the Islamic Art Festival in Sharjah National Art Museum.

There are three works on show here. The first is "Sinan," which is inspired by the architecture of iconic Turkish architect Mimar Sinan, and is carved into marble. The other two are newer pieces from 2016, "Muqarnas Study" and "Cube," which simply pay tribute to the more abstract philosophies of Islam.

Matthew Simmonds' work is currently on display at the Sharjah Islamic Arts Festival until January 24, 2016. 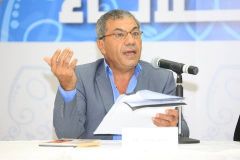 Sharjah Department of Culture has been achieving more than any other e...