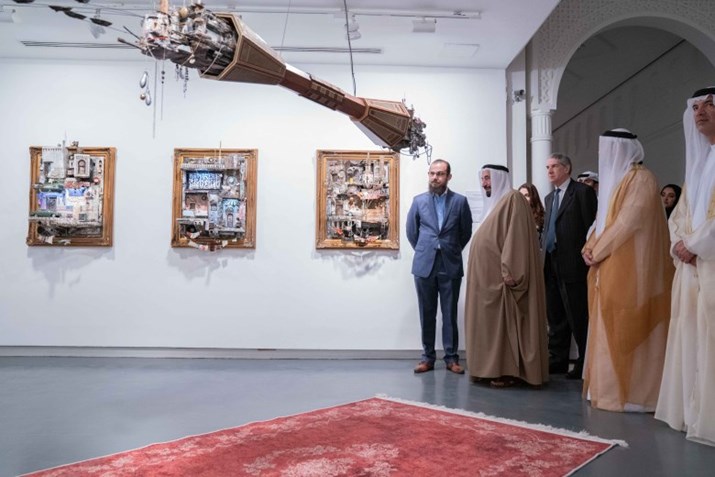 Last week, we witnessed the unveiling of Sharjah’s 22nd Islamic Art Festival; one of the renowned art festivals in the region. Under the patronage of His Highness Sheikh Dr Sultan Bin Mohammed Al Qasimi, member of the Supreme Council and ruler of Sharjah, and the Cultural Affairs Department at the Sharjah Department of Culture, the festival will run until 21st of January 2020.

Since its first debut in 1998, the annual Sharjah Islamic Arts Festival has played a strategic role in promoting the various kinds of traditional and contemporary Islamic arts in the region through local and international exhibitions, intellectual programmes, and interactive activities.

This year’s festival’s theme revolves around prospect. Prospect is a scope open to infinity. It prompts contemplation and venturing a journey towards visual realms that exist beyond the limits of space. It is admiring a beauty while being blindfolded. It is the practice of imagination that can invoke the absent beautiful and undiscovered realms. This theme emphasizes the unlimited artistic inventory that the prospect grants to any artist, not only in terms of spatial significance, but also in its temporal, cultural and historical presence, which bestows an artistic depth on the artworks. Such features are reflected in the Islamic arts with their unlimited prospects.

The festival features 253 activities in the form of exhibitions, lectures, and workshops. More than 28 organisations assisted in the coordination of the festival’s projects. There will be 55 exhibitions at the Sharjah Art Museum, Al Majaz Waterfront, Maraya Art Centre, and among other locations in the emirate. These exhibitions will be presenting works of artists from the United Arab Emirates, neighbouring Arab countries, and other countries from around the world.

Sharjah is hosting 108 artists from 31 countries, showcasing a total of 241 artworks. One of our favourites is Infinitum, a large-scale installation by New York-based Italian architect and designer Antonio Pio Saracino, which features arches and columns, a signature style in Islamic architecture.

“It looks exactly the way I planned it,” said Pio Saracino at the launch event last week. “The mirrored infinite arches are incredibly mesmerising. The overall perception makes you question what is physically real versus what is rendered reality.”

He added: “The arch is a symbol for many cultures, often connected to spirituality and seen as a visual metaphor for the departure from the familiar and the progress of humanity.”

The artistic installation invites us, the viewers, to contemplate, providing us with hopes as the representation of infinite column symbolises endless possibilities.

Also, among the participating artists this year is British artist Sinta Tantra known for her large-scale public artworks. Her work is displayed at Al Majaz waterfront alongside the work of Egyptian artist Ahmed Karaly, who is featuring his Evolving Building at the same location.

Other artists exhibiting works at the festival include Russian 3D artist Shozy, American artist Mary Wagner, who is known for her circular drawing that look like gears, Syrian American artist Mohamad Hafez, whose works depict his native Damascus in miniature, and Emirati artist Moza Matter, whose work centres around the act of making du’aa; a prayer to Allah.