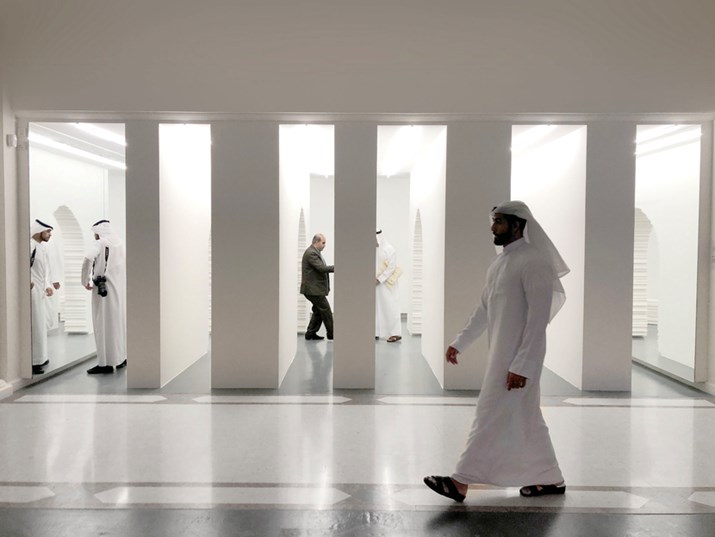 The Islamic Arts Festival has returned to the Sharjah Art Museum for its 22nd edition,  hosting 108 artists from 31 countries showcasing 241 artworks. Among the many highlights is a spectacular immersive installation titled Infinitum by the New York-based Italian architect and designer Antonio Pio Saracino.

“We are all very happy with the final results,” said Pio Saracino at the launch event on November 11th. “It looks exactly the way I planned it. The mirrored infinite arches are incredibly mesmerising. The overall perception makes you question what is physically real versus what is rendered reality.”

Arches are, of course, typical element in Mosques across the Islamic world and their origin can be traced back to the Umayyad Caliphate. This first dynasty of Islam spread the religion and the Arabic language through a growing empire that, between 661 and 750 A.D., stretched from Spain to India. Because of the rapid spread of the religious and political power of the Umayyad Caliphate, the art and culture also spread, and columns and arches became, for centuries, part of the most common design for mosques.

“Islamic Arches buildings are typically constructed of stone and the rows of Columns and Arches give an impression of limitless space,” said Antonio Pio Saracino, who was approached by the Department of Culture to create a piece for the festival and began by researching the meanings attributed to the arch. “The arch is a symbol for many cultures, often connected to spirituality and seen as a visual metaphor for the departure from the familiar and the progress of humanity.”

The finished installation is designed to be explored and prompt contemplation, the myriad reflections hinting at a ‘limitlessly optimistic future’. It’s flawlessly executed and a place of calm, but getting it to the UAE was logistically demanding. “The biggest challenge was international coordination with shipment from the United States,” Pio Saracino added, “but everything went smoothly. We had an incredible team locally at the museum and Sharjah Department of Culture.”

And the Pio Saracino has form when it comes to creating large scale works of public art; he designed life, two sculptures at the entrance of the NYPresbyterian hospital in New York City; The Guardians, two sculptures, which sit permanently at the entrance of Bryant Park, NY; and his work was in an exhibition in the Accademia Gallery in Florence next to Michelangelo's David. Twice garlanded with American Architecture Awards, Pio Saracino also designs buildings and products. Several of his designs are part of the permanent collections of museums around the world including the Centre Pompidou, Paris, New York’s Museum of Art and Design, and the Museum of Applied Arts and Sciences in Sydney.