The Beauty Hidden in the Prospect 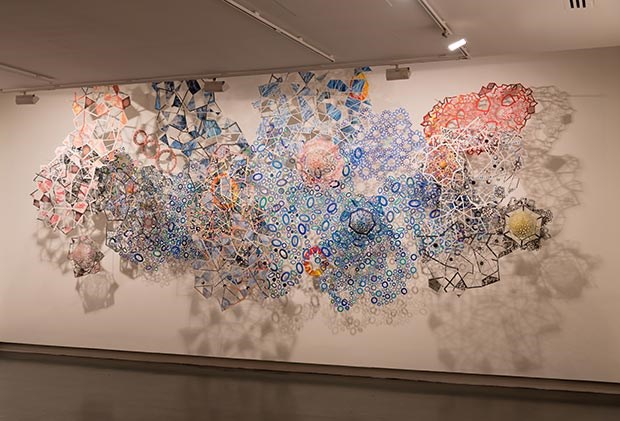 The 22nd edition of the Sharjah Islamic Arts Festival, which opened today at the Sharjah Art Museum, was organized by the Cultural Affairs Department at the Sharjah Department of Culture, under the patronage of His Highness Sheikh Dr. Sultan Bin Mohammed Al Qasimi, member of the Supreme Council and Ruler of Sharjah.

The theme 'Prospect' sheds light on Islamic arts and the associated contemporary creative representations. SIAF brings together international artists who share the visual connection to the tradition of spirituality and Islamic geometric art forms. The finest artworks communicate the theme from various angles, from spiritual serenity combining shapes and sounds, to mathematical geometric forms and conceptual art installations.

Sharjah Islamic Arts Festival has been a remarkable art event since its inception in the late 1990s. For more than two decades it has been growing into a prestigious international art platform. Now it is a highly acclaimed festival that attracts and highlights amazing artworks by 108 artists from 31 countries, from the United Arab Emirates, Kingdom of Saudi Arabia, Egypt, and neighbouring Arab countries, as well as Columbia, Italy, the United Kingdom, Argentina, Belarus, and Australia.

Today at the Sharjah Art Museum we had an opportunity to witness the opening of 31 exhibitions by Emirati, Arab and international artists, such as 'The Moon on the Celestial Equator' by Anna Kurkova from Belarus; 'Infinitum' by Antonio Pio Saracino from Italy, 'Making, Breaking' by Jan Albers from Germany, 'Heritage' by Jose Carlos Garcia from Spain, 'Naba'a' by Donia Alshetairy from Yemen, 'Rei' by Ray Kunimoto from USA, 'Patterns' by Azza Al Qubaisi from UAE and many more.

The 22nd edition of the SIAF will present 253 activities in the form of exhibitions, lectures, and workshops. More than 28 organisations assisted in the coordination of the festival projects. 55 exhibitions will be opened at the various location, the Sharjah Art Museum, Al Majaz Waterfront, Maraya Art Centre, and other. The exhibitions will be presenting works by artists from the United Arab Emirates, neighbouring Arab countries, and other countries from around the world. The Festival will also arrange for a dialogue between the artists and the audience, during which the artists will discuss the experiences that encouraged them to create contemporary visual art.